Last month was, of course, a most spectacular month because it was official publication date of my second book, Monster Hunters. July is a close second on great writing months for me, a good mix of new ideas and old.

I got something in all the usual publications I write for; Shepherd Express (an “Off the Cuff” on a bright poet, KJ Prodigy), M magazine (on band Ian & the Dream), Fortean Times (they ran Chapter 12 of Monster Hunters as an excerpt. I am including this in my list of published articles, but not in my total word count as it is not new material. The excerpt was paired with another story to give the issue a werewolf cover theme), and Forces of Geek (a fun “Monster of the Month” column this month on an Alpine monster known as the Tatzelwurm). I also contributed a collaborative photo essay (with Wendy Schreier) to Milwaukee Record, which was something new for me. We decided to just cruise over to Scott Walker’s presidential announcement with the goal of capturing “colorful Walker supporters.” It was an interesting experience and we got a lot of positive feedback, so we might do something similar in the future.

I contributed to one new publication this month. It always makes me happy to reach a new venue. Rust is a young publication and has a great artistic layout. I wrote an article on local drag king troupe the Miltown Kings, and they gave the story a nice four page spread and made them the cover photo. Very cool! If you click the link for the article name, it’ll take you to Rust’s online store where you can buy a copy.

27. “We went to Scott Walker’s presidential announcement and this is what we saw,” Milwaukee Record, July 14, 2015

My book Monster Hunters is out now. You can buy a copy HERE. 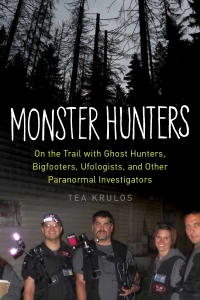 Well, the big June thing was the official publication date of my second non-fiction book, Monster Hunters. Obviously, that bumped my word count up quite a book. The book is approximately 90,048 words (although that is the unedited final draft).

Other than that, a couple short articles for M and my “Monster of the Month” column. Promoting the book and the Milwaukee Paranormal Conference took up a lot of time this month. Monster Hunters, by the way, is available in paperback and e-book form here: http://www.chicagoreviewpress.com/monster-hunters-products-9781613749814.php