← They are updating the Doomsday Clock tomorrow morning and I got to tell you, I don’t think it’s going to be good
2017 Reading List: Six Degrees →

It is now two and a half minutes to Midnight 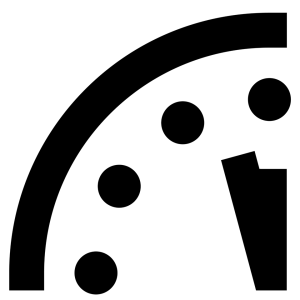 I anxiously watched the livestream of the Bulletin of Atomic Scientist’s press conference at the National Press Club to reveal their update of the Doomsday Clock this morning. It was, as they stated “particularly historic.”

“The board has decided to act, in part, based on the words of a single person: Donald Trump,” the Bulletin stated.

Among other reasons, the Bulletin stated a major reason for their decision was careless rhetoric, threats, the belief in “alternative facts” and fake news from world leaders from the U.S., Russia, Pakistan, and North Korea.

We are “back to an age of great uncertainty,” as one of the Bulletin members stated. They reminded us that President Trump has just been in office for six days and unless things change, we will continue to tick forward. The Bulletin urged all people to call on their leaders for change and to not ignore science.

Find out more about the Bulletin of Atomic Scientists (and sign up for their newsletter) here: http://thebulletin.org/

—
The Apocalypse Blog explores the topics of Tea Krulos’s third non-fiction book, which is about doomsday predictions, prepping, and pop culture. It’ll be published in 2018 (if the world survives that long). His first two books, Heroes in the Night (2013) and Monster Hunters (2015) are available from Chicago Review Press here: http://www.chicagoreviewpress.com/krulos–tea-contributor-296670.php

Posted on January 26, 2017, in Uncategorized. Bookmark the permalink. Leave a comment.

← They are updating the Doomsday Clock tomorrow morning and I got to tell you, I don’t think it’s going to be good
2017 Reading List: Six Degrees →