The Apocalypse Blog Book Club voted to read The Man in the High Castle by Philip K. Dick as our April selection. The book, written in 1962, has had a renewed interest from an Amazon show series based on the book. 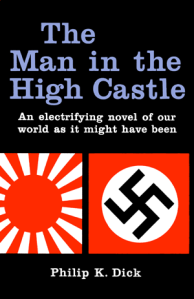 More on the book from Wikipedia:

Reported inspirations include Ward Moore’s alternative Civil War history, Bring the Jubilee (1953), various classic World War II histories, and the I Ching (referred to in the novel). The novel features a “novel within the novel” comprising an alternate history within this alternate history wherein the Allies defeat the Axis (though in a manner distinct from the actual historical outcome).

The Man in the High Castle is widely available online, at bookstores, and in library systems. We will have an in-person meeting to discuss the book the last day of the month, Sunday, April 30, 4pm at the Riverwest Public House. Takeaways from the meetings and online discussion will follow on our Facebook group page: https://www.facebook.com/groups/1482975718409410/

We also have a Goodreads page here: https://www.goodreads.com/group/show/213307-apocalypse-blog-book-club

There is no fee to be part of the Apocalypse Blog Book Club, just a desire to read a dystopian themed book every month and discuss the story and parallels we see to our current world.

Posted on April 12, 2017, in Uncategorized and tagged The Apocalypse Blog, The Man in the High Castle. Bookmark the permalink. Leave a comment.