Tea’s Weird Week: Laughing My Ass Off at These Bonkers Trump Paintings

“Art is in the eye of the beholder, and everyone will have their own interpretation.” — E.A. Bucchianeri
“When you’re a star, they let you do it. You can do anything. Grab them by the pussy, you can do anything.”– Donald Trump

I’m not sure how I stumbled on the works of Jon McNaughton, a painter from Utah who specializes in “highly detailed religious and patriotic subjects.” His bio also says that “there are three kinds of people who view my paintings: those who like it, those who hate it, and those who simply don’t understand.”

Boy howdy, McNaughton, I’m definitely 2 out of 3! I see Trump as everything bad in America– a greedy 2-bit con man who instills fear and paranoia instead of hope, all 7 deadly sins rolled into one foul, bloviating persona. McNaughton’s take, you’ll see, is a little different. But first, let’s dive in take a look at one of McNaughton’s pre-Trump era pieces: 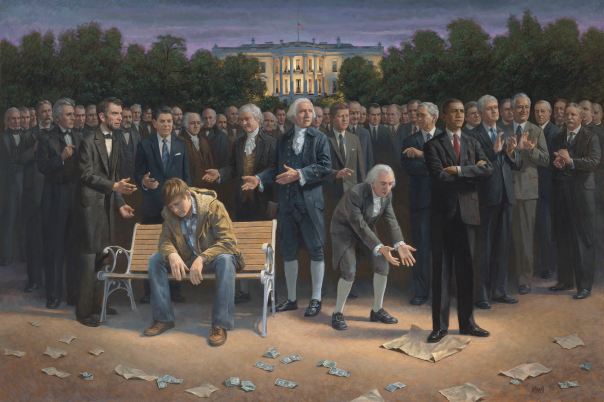 This painting, “The Forgotten Man,” was completed in 2010. It’s a Rembrandt of nuttiness. Here we see that McNaughton’s poor “forgotten man” is not a black person sent to prison for life for smoking weed or stealing $9, or a refugee thrown into a border concentration camp, but your average white dude slumped sadly on a park bench. A stern-looking President Obama has his arms folded and is ignoring him. The U.S. Constitution is pinned under Obama’s shoe like yesterday’s news. Also gathered around the poor guy, hashing out his plight: every president ever. Here’s what they’re saying:

James Madison: “Dude, seriously?! You’re stepping on it? Do you know how much time I spent writing that thing?! It’s like, over 200 years old!”

W: “Wait a minute, are you sure I’m not supposed to be over there by Washington and Kennedy?”

Old Mother Reagan: “Where am I? Why are we gesturing at this guy?” 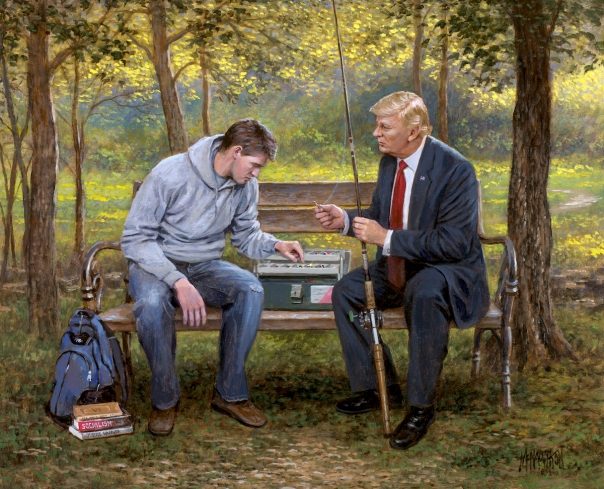 Based on the old chestnut that you can “give a man a fish, and you feed him a day. Teach a man to fish, and you feed him a lifetime,” this work, “Teach a Man to Fish” is a hilariously failed metaphor. Here we see another poor white dude who has put down his books about socialism and is saying “duhhh, what are these things?” while benevolent Trump shows him how to tie a lure in a tranquil forest. Here’s the thing, I don’t think “patient teacher” springs to mind when describing Trump. I’m also guessing he doesn’t know how to fish. Do you think young Trump sat on a pier attaching a squirming nightcrawler on a hook? If he ever has been out to fish, he probably paid someone to set up the rod for him, much like Don Jr. pays someone to drop him in an enclosed area so he can trophy hunt endangered animals.

I think a more accurate metaphor would be Trump running away from an angry fisherman (with an unpaid bill in his hand) with a flopping fish in between his teeth, like Yogi Bear stealing a picnic basket.

This painting, “Crossing the Swamp,” (a parody of “Washington Crossing the Delaware” by Emanuel Leutze) shows the danger in trying to create any depiction of the Trump administration as a coherent team. Of those featured here, almost half the crew has walked the plank: Nikki Haley (resigned), James “Mad Dog” Mattis (resigned, Trump says he fired him), Jeff Sessions (forced to resign), Sarah Sanders (resigned), John Bolton (HA! resigned, Trump says he fired him) and John Kelly (forced to resign). Trump better hope that Ben Carson and Ivanka can navigate that thing. 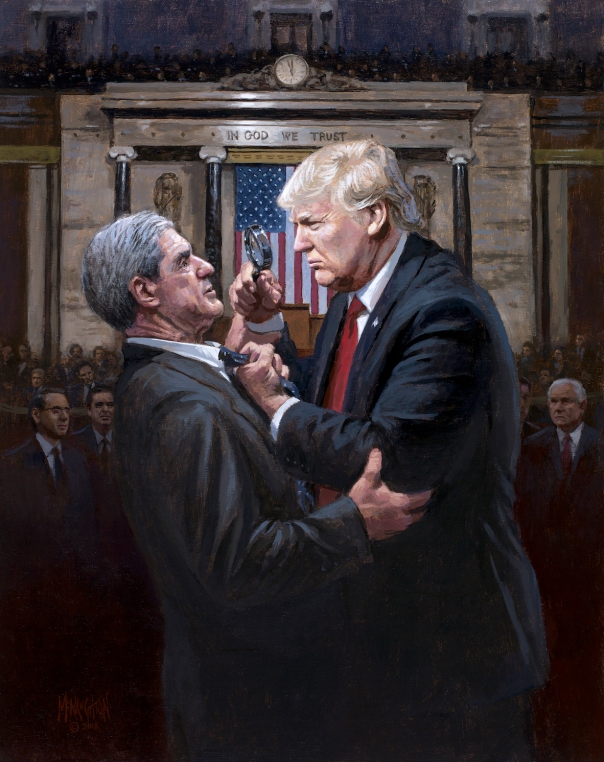 “Expose the Truth”: Trump: “C’mere you lyin,’ crooked FBI man! Let me grab you by the fucking tie and get a good look at you! A real good look, with my magnifying glass!”

This “Modern-day Paul Revere” is supposed to be obnoxious FOX News personality Sean Hannity, the top dawg at the station after Bill O’Reilly was fired (6 sexual harassment cases totaling $50 million finally did it). Instead of riding town to town to warn of the British invasion, you’ll hear Hannity call out things like:

“Halloween is a liberal holiday because we’re teaching our children to beg for something for free!” and “I define peace as the ability to defend yourself and blow your enemies into smithereens!”

This is McNaughton’s latest, “You Are Fake News.” For more on Trump’s clown problem, see my column HERE.

Conspiracy News Dept.: Flat Earther and homemade rocket pilot “Mad Mike” Hughes died after a malfunction with his parachute as he attempted flight on Feb.22 outside of Barstow. An upcoming show, Homemade Astronauts was at the launch to shoot footage.

“This chatty, fast-paced volume will entertain those who enjoy reading about unusual subcultures.”– Publishers Weekly (on Apocalypse Any Day Now)