Tea’s Weird Week: The Ghost of the Christmas Tree Ship

I sent in my manuscript for my book American Madness which will be out August next year. I also have a little book out about a year from now called Wisconsin Legends & Lore, which is a collection of some classic Wisconsin folklore, ghost stories, and urban legends. One of the stories I read about while researching is the tragic story of the Rouse Simmons, also known as the Christmas Tree Ship, a nice Wisconsin Christmas ghost story for you this Friday the 13th.

Every holiday season, Chicagoans eagerly awaited the arrival of the Christmas Tree Ship, which would load up with evergreens in Michigan, then sail down to Chicago, where it would tie up to a dock. Families would head over, pick out a tree, and drag it back to their homes on a sled. The arrival of the Rouse Simmons meant the arrival of the holidays. 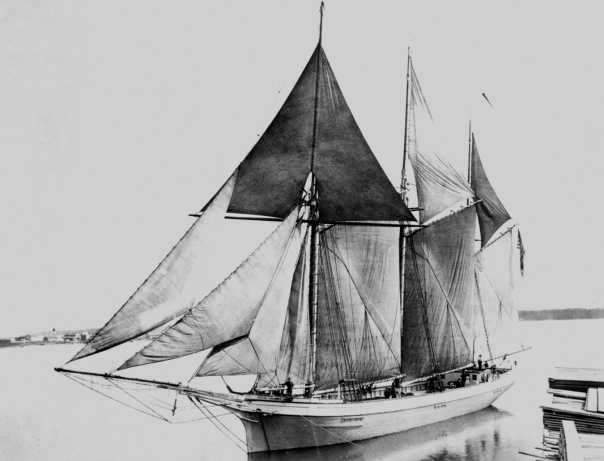 Captain Herman Schuenemann aka “Captain Santa” ran the business. He sold trees for fifty cents or a dollar, but he was known for generously donating trees to orphanages, hospitals, and poor families. His was not the only Christmas Tree Ship, but it would become the most famous. In November of 1912, Captain Schuenemann and his crew loaded 5,500 trees (imagine how piney that must have smelled!) into the Rouse Simmons, packing it as much as they could. There were supposedly bad omens, according to crew who declined to make the journey– rats seen abandoning ship, a crew totally an unlucky 13, and the ship leaving port on a Friday.

On November 23, 1912, the Rouse Simmons was sailing past Two Rivers, Wisconsin on route toward Chicago. A terrible storm hit Lake Michigan. The Rouse Simmons, already an old ship and overladen with thousands of trees, was thrashed in the wind, ice forming on the sails and ripping them. The Christmas Tree Ship (and a few other boats on the lake that night) and all hands were lost. Christmas trees from the boat washed ashore for years afterward.

Rather than be deterred by the lake that had claimed Captain Schuenemann’s life, his wife and daughters took over the business. The new Captain Schuenemann was his brave daughter, Elsie, who led the delivery of trees that same winter season of 1912. The family kept the business going until railroads and highways made the Christmas Trees ships obsolete in the 1920s and 30s..

The wreck of the Rouse Simmons was discovered by a scuba diver in 1971. They found that there were still needleless, skeleton-like trees in the cargo hold.

Legend says that you can see the ghost ship of the Rouse Simmons on Lake Michigan on stormy winter nights or on the anniversary of the night it sunk, struggling in the choppy waters to get south to Chicago.

A nice ending to this story is that a non-profit group called Chicago’s Christmas Ship, with the help of the Coast Guard, now continues the Christmas Tree Ship legacy. Using the sturdy Mackinaw, they’ve sailed to Navy Pier the last 20 years with a cargo of Christmas trees, where they work with community organizations to get trees to people who can’t afford them to make their holiday a little brighter.

You can find out more and donate here: http://christmasship.org/

More ghost stories! I host the Milwaukee Ghost Walk- Ghosts of Christmas Past tour tonight, tomorrow, and next weekend!: https://americanghostwalks.com/wisconsin/milwaukee-ghosts-of-christmas-past/

Tea shares his weird week with you every Friday.

When I was a kid, my family knew I was into “weird stuff,” so my parents and grandparents sometimes saved newspaper articles they thought I might be interested in.

The ones I remember vividly were the Tallmann House poltergeist of Horicon, Wisconsin, that grabbed headlines in 1988 (and appeared on Unsolved Mysteries) and the Beast of Bray Road, which howled and broke loose in 1991. They were probably the first newspaper reports I read, and I thought about them a lot, drawing pictures of what the apparitions in Horicon might look like, and imagining werewolves lurking in the Wisconsin cornfields my family drove by.

Not shared with me, by the way, were reports on Jeffrey Dahmer and his arrest the same year, 1991. I would learn about that by eavesdropping on my grandma and mom talking about the case in hushed tones as they drank coffee at the kitchen table, while I hid around the corner.

Many years later, I was thrilled to meet Linda S. Godfrey, who was the reporter to break the story of the Beast of Bray Road and has since become a prolific author. Me and my friend, photographer Lacy Landre, drove out to meet her for lunch in Elkhorn and then me and Lacy cruised down Bray Road to see the stomping ground of the Beast. I wrote about Linda and the Beast in my book Monster Hunters: On the Trail with Ghost Hunters, Bigfooters, Ufologists, and Other Paranormal Investigators (2015, Chicago Review Press) in a chapter titled “The Accidental Werewolf Chronicler.”

An excerpt of that chapter was also part of a werewolf themed issue of Fortean Times magazine (July 2015).

Linda has gone on to write many books and I’m glad she’s also been a part of the Milwaukee Paranormal Conference every year, and was presented with the first “Wisconsin Researcher of the Year” award at our year one event.

The Beast, meanwhile, has become a permanent part of Wisconsin lore, still very much talked about. For proof go no further than Seth Breedlove’s excellent The Bray Road Beast documentary, part of his highly recommended Small Town Monsters doc series.

I was happy to be asked to lead a discussion and Q and A with Linda for her new book I Know What I Saw: Modern Day Encounters with Monsters of New Urban Legend and Ancient Lore (Penguin/Random House), a great new collection of weird monster sightings. It’s happening Wednesday, July 17, 7pm at Boswell Book Company.

Here’s a short article I wrote on the book for the Shepherd Express: https://shepherdexpress.com/arts-and-entertainment/books/linda-s-godfrey-looks-for-monsters-in-i-know-what-i-saw
And a link to the Boswell appearance event page: https://www.facebook.com/events/454343315368924/

It’s sure to be an interesting discussion!

I’m glad to say I’ll get a chance to revisit the Beast myself (along with the Tallmann House poltergeist and much more) in my book Wisconsin Legends & Lore, out early in 2020 (I have two books out next year!) from The History Press.

The Week in Links

I’m the tour guide for the Milwaukee Ghost Walks Third Ward Tour (almost) every Saturday evening. Friday tours will be added starting next month. You can get tickets here: https://americanghostwalks.com/wisconsin/milwaukee-ghost-walks/

Get a copy of my new book Apocalypse Any Day Now: Deep Underground with America’s Doomsday Preppers: www.chicagoreviewpress.com/ApocalypseAnyDayNow