I have a little book that just got (self) published. It is a collection of 21 poems (and 9 illustrations) titled Palookaville.

Yes, I know there is a comic series by Seth titled Palookaville. But he didn’t invent the word, and neither did any of us. A lot of the poems are whacky, funny, just bizarre. Some offer insight into my life, some don’t. There is a limerick, a haiku, and a bunch of formless rants. I wrote poems about topics I’ve already encountered and wrote about (Real Life Superheroes, roller derby, cryptozoology, etc.) and some “life experience” like working in a kitchen.

I started the project because I had just signed on to do my next non-fiction book, Monster Hunters (2015), which I knew would be a lot of intense work. I needed a more care free project for balance. Ballyhoo (see “Other Projects” tab) was at a stand still while David worked on art and I randomly had a great vision of me cranking beatnik poetry on a typewriter. You know Ginsberg, Ferlinghetti, Burroughs, Whitman, Dr. Seuss, Krulos, right? ha ha.

I found a typewriter on the side of the road one day. It needed a ribbon, so I ordered one, and set to work. I did a small zine version of this for last year’s Milwaukee Zine Fest, then did a few more poems, a few more illustrations and expanded it to this 32 page book. A sample poem and illustration, “Floppy’s Lament” is posted below, followed by ordering info. There is a Kindle ($2.99) and paperback ($4.99) version.
## 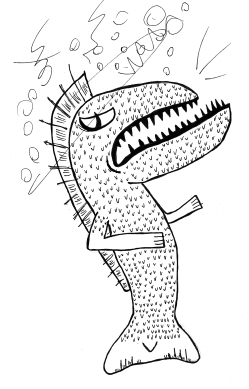 Floppy was a bad, bad fish
he lived in the Amazon River
he drank and drank and drank
he don’t give no shit about his liver
when an animal crossed his scene
Floppy would send him to the cleaner
and he had but one regret: he couldn’t get no meaner

Floppy like to smoke crackrocks
he had a pipe made out of foil
he puffed and puffed and puffed
and his fish blood would begin to boil
then he’d bug out and bite faces
or punch some dude in the wiener
but still he had one regret: he couldn’t get no meaner