While working on my book Apocalypse Any Day Now, I developed an annual tradition, one I guess I’m carrying on (old habits). Every January, I watch the Bulletin of Atomic Scientist’s Doomsday Clock reveal via live streaming video. The Doomsday Clock is a metaphor that shows how close we are ticking toward a major global catastrophe. Factors considered include nuclear threats, climate change, and emerging technologies. It was created in 1947, when the time hovered at 7 to midnight.

My intro to Apocalypse is titled “Two Minutes to Midnight,” which reflects where the clock landed in 2018 (and remained at last year), the closest we’ve been since the invention of the H-bomb. The chart below (from The Bulletin) shows the three times the clock has been this close as well as the furthest away the clock has been (1991, 17 minutes to midnight).

So, where are we in 2020? Not good news, I’m afraid. The Bulletin of the Atomic Scientists moved the clock to 100 seconds to midnight, the first time the clock has been measured in seconds and the closest it has ever been since the clock was created.

The board gave many threats as the reason for clicking forward. There were the same problems it considers every year, like nuclear proliferation, greenhouse pollution (which has put us in a “climate emergency,” the board said), the development of biological weapons and hypersonic weapons, and cyber information warfare.

Some interesting new notes– they cited the Space Force as a new factor as we introduce more combat capabilities, as well as the danger of deepfakes in spreading chaos. The labeling of credible news sources as “fake news” while actual fake news misinformation is spread as fact, the “disdain for expert opinion,” and “trashing of respected science boards has created “an unstable equilibrium around the world.” The board said that “the world is like a pressure cooker.” Close your eyes and count to 100. Then imagine the world blowing up.

“The time to wake up is now,” the board said. “We’re not there yet, but we have to pull back from the brink.”

Speaking of misinformation, time for… #TrumpConspiracyCounter 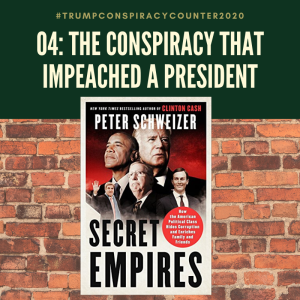 Tea’s Weird Week has a goal to catalog all of President Trump’s promotion and endorsements of conspiracy theories this year.

4.) January 16: Trump retweets a Breitbart News post endorsing a new book by conspiracy theorist Peter Schweizer. Trump says he had a “perfect phone call” with Ukrainian President Zelensky and that there was “no quid pro quo” in asking him to investigate the Bidens. But where did he get this idea in the first place? The answer is Breitbart News editor and conspiracy peddler Peter Schweizer, who stitched together the unfounded Biden theory in his 2018 book Secret Empires. The book got a lot of play on FOX, a channel Trump reportedly watches several hours a day, so he picked up the theory from there and ran with it.

For more, I recommend Jane Meyer’s article for The New Yorker, “The Invention of the Conspiracy Theory on Biden and Ukraine.”

6.) January 17: Trump floats the theory that the “impeachment hoax” was designed by Nancy Pelosi to keep Bernie Sanders stuck on the Senate floor instead of on the campaign trail in Iowa, thus giving Joe Biden the upper hand. Source: “How Trump is Spreading a Conspiracy Theory About Pelosi, Biden and Sanders,” New York Times.

7.) January 20: Retweets a poll from Breitbart News. The #TrumpConspiracyCounter tallies every retweet of Breitbart News, InfoWars, and other conspiracy sites and theorists.

8.) January 21: Climate Hoax! This ties right into today’s Doomsday Clock announcement. Trump spoke at the World Economic Forum in Switzerland and said that climate scientists are “alarmists” who “want absolute power to dominate, transform, and control every aspect of our lives.” He also called them “prophets of doom,” “foolish fortune tellers,” and said that the US has the “cleanest air in the world.” That’s a lie. Source: “Trump Just Called Climate Scientists ‘Foolish Fortune Tellers,'” Vice.

Please note that these entries were before Trump’s major tweetstorm over the last couple of days. The counter has more than doubled already, but we’ll pick up the trail next week.

“For some reason, though some of his observations are alarming, whenever I read Tea’s work I feel better because of his level-headed reportage and humor.” –Lee Gutowski, editor, Riverwest Currents