← A Week to be Angry, Not “Weird”
Tea’s Weird Week: Watch Out for the Phrase “Do Your Own Research” →

Tea’s Weird Week: Freak Out Your Next Zoom Call with These Conspiracy Inspired Backgrounds

The stay at home order has been lifted in many places, and businesses are slowly opening, however, Zoom is going to be the preferred method of meeting for some time to come. At your next conference call why not give your colleagues…something to think about with these Zoom backgrounds I’ve created for you. Impress your friends, give your enemies a shiver of paranoia.

Most of these classic conspiracy spots are places I explore in my upcoming book (more info and a book trailer at the bottom of this post) American Madness. Now you can enter these mysterious locales from the safety of your couch. Tell ’em Tea Krulos sent ya!

Here’s a photo of the Bohemian Grove, a secret society retreat deep in the redwood forest in northern California. It’s owned by the Bohemian Club, it’s members a who’s who of the world’s most powerful men. To the left, you’ll see a crude statue of an owl, where a strange ritual called the “Cremation of Care” is performed. The first chapter of American Madness explores the grove– it’s history, membership, and strange secrets. A Zoom background is much safer than trying to visit in person– you’ll be quickly arrested for trespassing.

Hello, I’m calling you from outside the Skull and Bones “Tomb.” This is a legendary Yale University fraternity that has existed since 1832. It’s like the junior version of the Bohemian Grove and it’s members have including several presidents, corporate leaders, members of the CIA, and other powerful people. There was a spotlight on the institution in 2004 when former “Bonesmen” George W. Bush and John Kerry ran against each other, guaranteeing a Bonesman would become president.

Skull & Bones has an kooky ooky initiation ritual inside this windowless building, located on the Yale campus. Sure, you could use a color photo of this place, but it looks better in black and white. 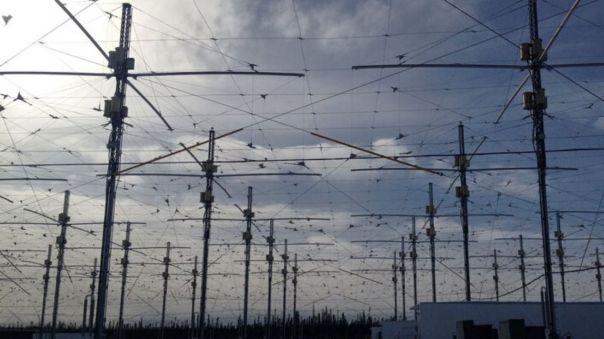 This anxiety-inducing background is the antenna array of the High-frequency Active Auroral Research Program (HAARP), located up in the wilds of Alaska. It was started in the 1990s as a joint effort by the military and the University of Alaska to study the ionosphere. Because of the military’s involvement, conspiracy theories quickly spun that they were weaponizing weather or attempting mass mind control.

Here’s the front gates of Area 51, one of the world’s most famous conspiracy sites (I visited– well, I saw the outside of it, while working on American Madness). It’s where the government has supposedly stashed UFOs and extra-terrestrial bodies and got a lot of attention last year with a viral “Raid Area 51–They Can’t Stop Us All” Facebook page.

Here’s a background of a more contemprary conspiracy, a scene from a “lockdown protest” where people think COVID-19 is “fake news.” But uh-oh, what’s that protester pointing at?

“Tea Krulos has forged a fascinating collection of work by immersing himself in various sub-cultures that exist on the fringes of society.” —Cult of Weird

American Madness: The Story of the Phantom Patriot and How Conspiracy Theories Hijacked American Consciousness by Tea Krulos from Feral House on Vimeo.

← A Week to be Angry, Not “Weird”
Tea’s Weird Week: Watch Out for the Phrase “Do Your Own Research” →