Tea’s Weird Week: I can’t even write about these dang scooters without it getting paranormal

I put it forth to Facebook to ask what I should write about in the column this week, and the subject of scooter chaos came up. They do seem to be everywhere and opinions are mixed. Some are saying they’re just stupid fun while others are quoting J. Jonah Jameson and shouting that they’re “a goddamn menace!” After a failed trial attempt last year, the Bird scooters returned and Lime and Spin appeared too, filling the sidewalks with 1,050 scooters. 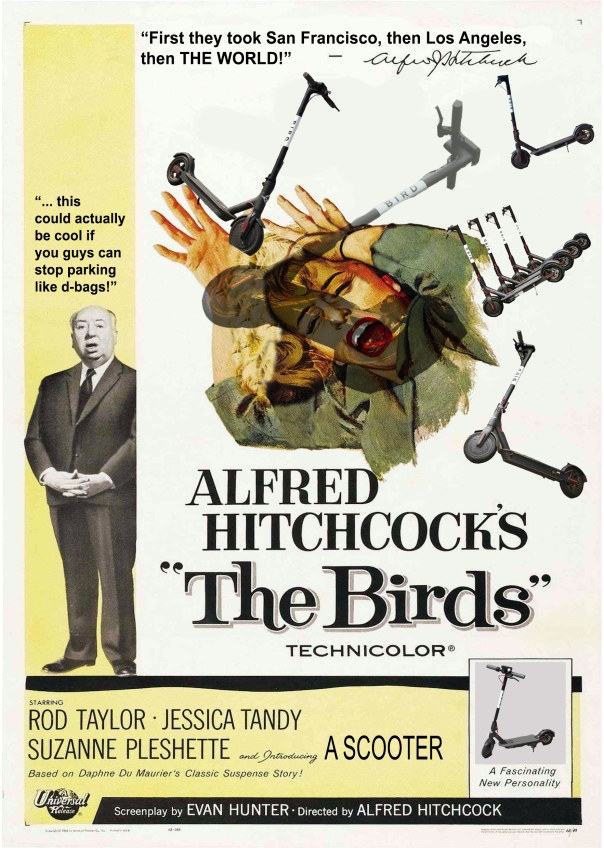 My own opinion is a little mixed. I’m all for public transportation options. And they do look fun– just last night I was riding the bus and we passed by a group of about a dozen teenagers riding scooters together in the bike lane, and it looked like they were having a blast, laughing and talking. It reminded me of my youth, when me and a group of friends would ride skateboards or bikes or just walk around, often with no particular destination in mind.

But I’ve also seen some reckless scooter driving (Urban Milwaukee reports over 100 complaints of scooter violations, including collisions with pedestrians, were reported within a couple weeks and Marquette and UWM recently banned them from campus). I think a couple of the problems here is that the training and test ride on these things is live and in public. You just jump on and learn how to ride it while you’re barreling down the sidewalk or street. You learn to drive a car in an empty parking lot, you learn to drive a scooter on Water St. and Wisconsin Ave. With a max speed of 15mph, the scooters are too fast for a sidewalk and too slow for a street…or at least too slow for I-94.

On Monday three were fined for riding Lime scooters on I-94 near the Marquette interchange.

CBS 58 reports: “The scooter riders told deputies they were visiting from Texas and were using their GPS to navigate to the Harley Davidson Museum on the scooters.”

But what if there was a way people could have their scooters without running over our toes? [hippie voice] What if we could, like, ride our Lime scooters through the cosmos, man? Wouldn’t that be faaaar out?

Coincidentally (or was it?) my friends at the Singular Fortean Society issued a report on Wednesday of a man they interviewed from Springfield, Illinois, who said he had an encounter with a “humanoid flying a scooter with no wheels” in the night sky as he walked home in the woods on some railroad tracks.

The witness, Mike, told Singular Fortean Society (you can read the whole report HERE) described what he saw in the night sky:

“It looked like a person, like a big person, on a scooter; I swear I could almost see the handlebars on the thing. That’s what my recollection was. A scooter, with no wheels, with some big guy, probably six foot, 250 pounds or something like that. It looked like a little Honda scooter, and it looked like it had a little light on one side of it. I remember seeing something shining, like on the front of it—kind of like a headlight,” recounted Mike.

I know what you’re thinking. This is amazing and we need to capture this ET tech, reverse engineer it, and franchise it ASAP to cash in on the scooter craze. But what should we named the company? Here’s the poll:

Winning name will be announced in next week’s column!

07/21/2019, 2:46 pm: Brookline, Massachusetts police blotter report of “a topless woman wearing clown makeup and an apron, standing in front of a building.” [via brookline.wickedlocal.com]

08/19/2019: USA Today reports that a New Jersey woman witnessed a plush doll of Pennywise (from It) fall into her yard. The doll had letters and numbers written on the forehead, which, according to the witness, “looked culty.” The police were called, the doll burned, and the frightened woman slept with a knife for protection.

Looks like a kid with a good throwing arm is patting themselves on the back for a prank well done. [via USA Today]

—
My book Apocalypse Any Day Now is available here: http://www.chicagoreviewpress.com/ApocalypseAnyDayNow