Memorial Day weekend— a chance to enjoy relaxation, grill out, and remember those who have sacrificed their lives fighting for our country. Or if you’re President Trump, a time to spend golfing and then spiraling into a tweetrage hurling insults, threats, and conspiracy theories. Can you imagine Obama or Bush acting like this? They’d be led out of the White House in a straitjacket, but we’re so used to this that it’s just another crazy day, another Trump meltdown.

Trump has been trying to push three big conspiracies this month of May– he’s continued to spin his mail-in ballot fraud theory (which this week prompted Twitter to finally slap warnings on his tweets), as well as continuing to tweet about “Obamagate,” a theory so convoluted that even Trump can’t explain it. Here’s an exchange between him and a reporter after he he went on a tweetfit about it on Mother’s Day (maybe it’s just holidays that get his conspiracy hype pumped up). After a reporter from the Washington Post asked him to explain what “Obamagate” was, Trump responded:

Uh, Obamagate. It’s been going on for a long time. It’s been going on from before I even got elected, and it’s a disgrace that it happened, and if you look at what’s gone on, and if you look at now, all this information that’s being released — and from what I understand, that’s only the beginning — some terrible things happened, and it should never be allowed to happen in our country again.

Uh, ok, thanks for the clear answer on that. When the reporter tried to follow up and asked again what exactly the crime was that he was referring to, Trump snapped:

You know what the crime is. The crime is very obvious to everybody. All you have to do is read the newspapers, except yours.

And then there is the “Joe Scarborough Cold Case” conspiracy.

Ooh, does he hate them! They show clips of him doing and saying stupid things…They say he isn’t doing a good job responding to this damn pandemic where 100,000 people have died…Fake news! He’s tried bashing their ratings and calling them crazy and making some shitty comment about Mika bleeding from a facelift, but it isn’t enough– he wants to burn them, badly, his heart overflowing with hate. 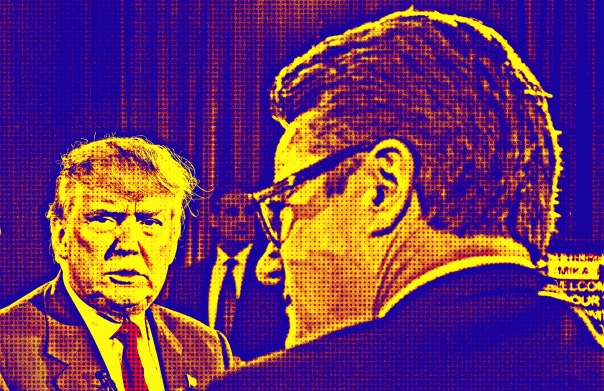 Then Trump remembers something dirty and disgusting– wasn’t there a conspiracy theory from the early 2000s, something about Scarborough murdering an intern and then resigning? There was (and I’m sad to say it was liberals who originally pushed it). Scarborough had an employee (not an intern) named Lori Klausutis, 28, a constituent services coordinator who worked in Scarborough’s office. In 2001, she was found dead on the floor, near a desk.

An autopsy revealed that Klausutis had an undiagnosed heart condition and a coroner concluded she passed out and hit her head as she fell. The coroner said the head injury caused the death, but she wasn’t struck by another person. The death occurred a month after Scarborough announced he was leaving office. Scarborough was in Washington when Klausutis died.

Like any conspiracy that grows legs, there are some straws to grasp at. Scarborough was getting a divorce and people whispered that he must have been having an affair with Klausutis (there’s no evidence or even allegations of this) and murdered her (though he was in DC at the time, not Florida, so he would have needed to hire a hit).

Then there was the medical examiner, Michael Berkland. He added fuel to the conspiracy story in 2012 when he stopped paying for a storage facility and a creepy scene at Uncle Bob’s Storage was revealed:

Lungs, hearts, tissue samples and 10 brains were found Aug. 22 in a storage container at Uncle Bob’s Storage that Berkland was renting, according to Pensacola police. There were body parts from more than 100 people found in the air conditioned unit.

They were stored in formaldehyde in plastic containers, specimen cups, trash bags and one part even in a 32-ounce Styrofoam cup from a convenience store, according to police. Some of the containers were cracked and leaking.

Yikes! But that doesn’t mean that Berkland’s autopsy report was untrue. The investigation found no reason to dispute it.

Trump can’t pass up an opportunity to smear an enemy, as he has many times before (I write about this in a chapter of my upcoming book American Madness) so he takes this half baked theory and shoots it out via Twitter. A recent article in The Atlantic summed it up well:

This is what the real “Trump Derangement Syndrome” is. He tweeted about the conspiracy six different days this month (so far):

May 4:“Concast” should open up a long overdue Florida Cold Case against Psycho Joe Scarborough. I know him and Crazy Mika well, used them beautifully in the last Election, dumped them nicely, and will state on the record that he is “nuts”. Besides, bad ratings! #OPENJOECOLDCASE

May 12: When will they open a Cold Case on the Psycho Joe Scarborough matter in Florida. Did he get away with murder? Some people think so. Why did he leave Congress so quietly and quickly? Isn’t it obvious? What’s happening now? A total nut job!

May 23: A blow to her head? Body found under his desk? Left Congress suddenly? Big topic of discussion in Florida…and, he’s a Nut Job (with bad ratings). Keep digging, use forensic geniuses!

May 24: A lot of interest in this story about Psycho Joe Scarborough. So a young marathon runner just happened to faint in his office, hit her head on his desk, & die? I would think there is a lot more to this story than that? An affair? What about the so-called investigator? Read story!

May 26: The opening of a Cold Case against Psycho Joe Scarborough was not a Donald Trump original thought, this has been going on for years, long before I joined the chorus. In 2016 when Joe & his wacky future ex-wife, Mika, would endlessly interview me, I would always be thinking…
…about whether or not Joe could have done such a horrible thing? Maybe or maybe not, but I find Joe to be a total Nut Job, and I knew him well, far better than most. So many unanswered & obvious questions, but I won’t bring them up now! Law enforcement eventually will?

May 27: Psycho Joe Scarborough is rattled, not only by his bad ratings but all of the things and facts that are coming out on the internet about opening a Cold Case. He knows what is happening!

This is all especially cruel because Lori Klausutis was a real person, with a family. Her husband, Timothy Klausutis, wrote a heartbreaking letter to Twitter CEO Jack Dorsey. It reads, in part:

I have mourned my wife every day since her passing. I have tried to honor her memory and our marriage. As her husband, I feel that one of my marital obligations is to protect her memory as I would have protected her in life. There has been a constant barrage of falsehoods, half-truths, innuendo and conspiracy theories since the day she died. I realize that may sound like an exaggeration, unfortunately it is the verifiable truth. Because of this, I have struggled to move forward with my life.

You can read the entire letter here: https://www.nytimes.com/2020/05/26/business/letter-to-twitter-ceo.html

Twitter had a generic response, but they did for the first time flag two of Trump’s tweets (untrue statements about voter fraud). Trump, of course, had a melt down about this and today is signing an executive order against social media companies.

Meanwhile, during all this, thousands more people have died from COVID-19. This is why having a Conspiracy Theorist-in-Chief is dangerous: he will ignore everything else to bring you down. If you criticize him, he will label you an “enemy of the people” and spread any lie he can find to try to smear you. These are dark times.

SEE ALSO: My first column of the year, which was about the Kevin Spacey murder conspiracy; also my column from a couple weeks ago about candidates playing the Trump conspiracy playbook to run for office.

Project COUCHSURF: Last week I wrote about my new hobby of spending a couple hours a week in the CIA Virtual Reading Room. This week I read some interesting files on a wave of UFO sightings in Europe and Africa in 1952 (same year as a well known UFO sighting in Washington DC). They were in the CIA’s UFOS: Fact or Fiction? collection.

“Tea Krulos has forged a fascinating collection of work by immersing himself in various sub-cultures that exist on the fringes of society.” —Cult of Weird

American Madness: The Story of the Phantom Patriot and How Conspiracy Theories Hijacked American Consciousness by Tea Krulos from Feral House on Vimeo.