What a week! American Madness official release date was Tuesday and it’s been so great to see the book featured in the Milwaukee Journal Sentinel as well as an excerpt on Literary Hub. Most exciting of all is seeing people posting pictures of their copies of the book and telling me that they’re starting to read it.

For my column this week I decided to solicit my social media for conspiracy questions. Here’s a few of them. I’ll be doing another “ask me anything” column in a couple months, titled “American Madness–spoilers edition” after people get a chance to read the whole story. 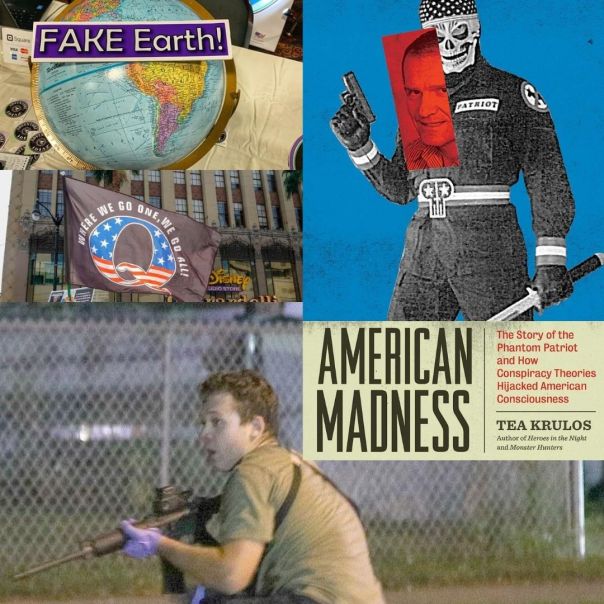 First up, not a question, but a comment I got on Twitter that I want to talk about:

Tea this book foreshadows what we are living in right now and especially applicable to another Phantom Patriot in 17 year old Kyle Rittenhouse, who shot and killed protesters in Kenosha. –Sleepersound

Yes, Tuesday was an absolutely horrifying night in Kenosha (about 40 miles to the south of where I live, Milwaukee) after a militia member killed two people and severely injured a third. Kyle Rittenhouse, spotted in the front row of a Trump rally in January, thought he was fighting for justice and the American way, much like the main subject of my book, Richard McCaslin (aka the Phantom Patriot) did. McCaslin heavily armed himself and raided a place called the Bohemian Grove in 2002 (but didn’t kill anyone).

Also of note– the leader of the Kenosha Guard (a sort of ad hoc militia that organized an event page encouraging armed citizens to show up in Kenosha) sent the police chief a letter proudly noting that the group had been reported on by InfoWars, Alex Jones’ media site. Jones was an inspiration to McCaslin and several others who have committed violent acts over the years.

Have you ever heard a true ends to the means on the flat earth theory? I’m not a believer in many conspiracy theories–but I can understand why someone would when presented the outcome.–Addo

That’s something I was curious to find out when I attended a flat earth conference last November, which I write about in a chapter of American Madness titled “The War Against Science.” If it had been discovered that the world was flat, why cover it up? Science is always evolving with new data, readjusting when they find a theory to be wrong, so what is the gain in the alleged lie?

Flat Earthers say it’s all because of greed from NASA. They started out wanting to explore space in earnest, but when they discovered the truth, they needed to maintain the lie to get paid. They couldn’t get their massive annual budget ($22.6 billion) for space exploration if there is no space beyond the dome covering the earth.  So there you go, follow the money…follow it to the end of the earth.

Any thoughts on the whole “hitler got to Argentina” thing? (Yes, I use a lower-case spelling of his name intentionally)— Shane

Shane, I’ve read about a few Nazi conspiracies– the escape to Argentina in a U-boat, the alleged hidden base in Antarctica, the UFO program. I really like reading classic conspiracy stuff like this and the JFK assassination (even if I don’t believe it). In this case, I think it’s well proven that Hitler died in Germany. One piece of solid evidence was an analysis matching his teeth to those found in the remains in his bunker: https://www.usatoday.com/story/news/world/2018/05/21/hitler-teeth-test-dispels-myths-nazi-leaders-survival/627831002/

What are the main tenants of the Q “movement?”— Samwell

QAnon beliefs are always morphing and spinning new ideas, but the core belief is that an evil cabal of Democrats, Hollywood, the mainstream media, and other liberal villains are secretly running a satanic child sex trafficking ring, engaging in cannibalism, and harvesting adrenochrome from victims to get high on. The believe a secret informant calling themselves “Q” is leaking information on Trump’s secret plan to bring this cabal down, a period of reckoning called “The Storm” which will lead to a “Great Awakening” of the truth. It’s very cult-like in it’s cognitive dissonance.

Other terms to be wary of– the QAnon motto “where we go one, we go all” (wwg1wga) and #SavetheChildren, a hashtag they’ve sadly hijacked, infiltrating the actual problem of sex trafficking with Q nonsense.

Are more groups like QAnon who have been found making up things going to become more commonplace? What do you think would happen to their followers if they were shown who was behind it? –Discordia

Discordia, I’m afraid both parts of this answer are painful. First, yes, I do think QAnon and other groups will continue to grow, especially in this time of madness. A QAnon believer, Marjorie Greene, is most likely going to be elected to Congress and there are a couple other candidates who have a shot. Trump himself said he liked QAnon because “I understand they like me very much, which I appreciate.” When that type of legitimacy is given to a group like this, it emboldens them and makes it easier to recruit new members. I think it’ll be easy for similar groups to gain traction.

To the second question, I think that “Q” is most likely a troll or combination of trolls, but sadly even if there was solid evidence of this you could present to Q followers, they will dismiss it. You might lose a few believers, but the core group will say anything you try to present to them is a “deepfake,” “fake news,” or a “hoax.”

It’s frustrating– as I discuss in American Madness, once you go down that rabbit hole, it’s really hard to come back from it.

—
For more ways you can support me and my book, please see this entry: “American Madness is Out Now!“

Purchase from Lion’s Tooth for a signed, inscribed copy, a bonus comic zine, Lion’s Tooth swag, a “this machine kills fascists” sharpie from Feral House, and access to in-person and online events with me! Right here: https://www.lionstoothmke.com/american_madness.html#/ 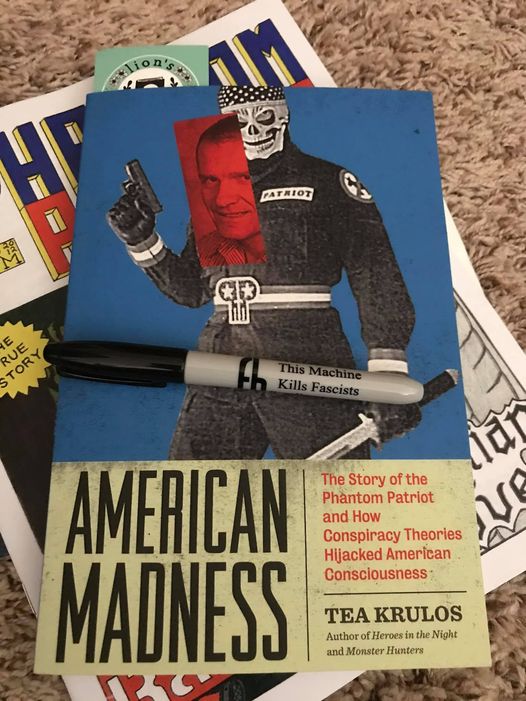 Diorama from Feral House on Vimeo.